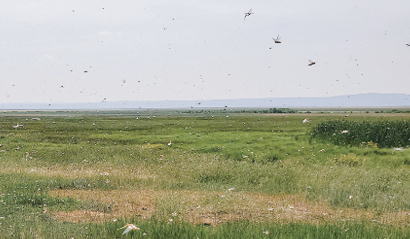 Exacerbated by drought, heavy grasshopper and Mormon cricket populations are expanding across the West and feeding on rangeland and crops in several Northern California counties, impacting farmers and ranchers.

Plumas County cattle rancher and hay grower Susy Pearce said this is her fourth year of dealing with the worsening phenomenon.

“The grasshopper infestation started in one direction, and they just migrated clear across the valley, so now, every year they’re further across the valley,” Pearce said. “The first couple of years they were so thick. The cattle would walk across the field with their eyes shut because they couldn’t see.”

The grasshoppers migrate great distances and can cause severe damage to rangeland and feed crops. “Now that they are spreading to other areas, it’s going to be a much bigger infestation,” Pearce said.

He said there has been a lot of grasshopper activity the past few years in Lassen, Modoc, Sierra, Plumas and Siskiyou counties, and many people have lost a lot of forage.

“This is especially devastating with the drought and the crazy price of hay,” Getts said. “It has resulted in folks needing to either pony up and pay for feed, or in some cases, cut the numbers of animals.”

Pearce estimates damage from grasshoppers has reduced the local hay crop by about a third. “Once you mow, the rows become just full of the grasshoppers, and you bail them right up with the hay,” she said.

Damage by grasshoppers to hay and ground in Modoc County is “significant,” affecting 400,000 to 500,000 acres, said Laura Snell, UCCE livestock and natural resource advisor in Modoc County. In some places, she has counted 80 to 100 or 200 grasshoppers in a 1-foot square.

Snell said some farmers lost up to 70% of their hay crop last year—as “grasshoppers eat a significant amount, considering how small they are.”

The grasshoppers and Mormon crickets have been reported in 17 western states, with severe infestations in drought-impacted eastern and central Oregon and far Northern California.

Modoc County rancher Herb Jasper, whose ranch is near the Oregon border, said the area has had “severe problems.”

“I don’t know of anybody in this area that has ever seen the grasshoppers as bad,” he said, adding, “We’ve had brown smears across the roads, and it was grasshoppers.

“They are just starting into the adult stage, and some are starting to fly, and believe me, it is no fun when you go through that. It’s pretty miserable.”

Jasper said because his pasture and hay ground was “pretty much mowed down” by the grasshoppers, he had to purchase supplemental feed, which remains in short supply.

“We put up round bales that we don’t sell but feed to our own cattle. The last cutting that we took in, some of those round bales turned black because of the grasshoppers,” Jasper said.

The problem was much more widespread last year. Snell said some ranchers had to buy $20,000 to $40,000 worth of additional hay in 2021 to make up what was affected by grasshoppers.

Jasper said the damage last year prompted him to sell off all his calves, “which we don’t normally do.”

To control grasshoppers and prevent them from laying more eggs, many ranchers have applied pesticides. But Pearce, the Plumas County rancher, said the infestations will continue without widespread treatments.

“When the eggs hatch, there are hundreds,” Pearce said. “The application reduced the problem by 50% to 75%, but they’re still all over in the field and will continue to lay eggs.”

“Unlike neighboring Oregon and Nevada, which have APHIS environmental documents in place to spray on adjoining federal lands (where the eggs generally hatch), the California APHIS office gave up its grasshopper program some time ago,” Curtis said. “The Nevada (APHIS) office has offered to complete an environmental assessment document for California (APHIS), but it’s getting wrapped around the axle of the bureaucracy.”

USDA announced last year that it would treat 1.6 million acres of rangeland nationally with insecticide in hopes of curtailing the spread. Those in affected California counties are hopeful that a solution to suppress grasshoppers emerges soon.

“If they treat the federal lands, it protects the private lands,” Snell said, adding that more help may be available through the USDA Noninsured Crop Disaster Assistance Program. She suggested that affected producers keep good records to potentially apply for federal aid.

For now, Jasper said, “We’re limited financially with what we can do.

“All I’m looking for is to get some help here and recognizing that it is a widespread problem,” he said. “It’s not just locally on one ranch; it’s spread all over.”

(Christine Souza is an assistant editor of Ag Alert. She may be contacted at csouza@cfbf.com.)